What caught my attention was the combo of doc feel mixed with sci-fi. Love the concept of an alen containment camp.

Caught the first episode of This Week in Startups. Broadcast / event type programming is evolving in some interesting ways. twitter is empowering a whole new type of back channel.

I love niche based programing and especially the kind that provides transparency into process. We do a lot of that over at WBP. If Jason Calacanis can bring in high caliber guests which I’m sure he will – then I’ill be watching.
.

I have to admit I’m a bit excited. As I stand waiting in an empty parking lot I feel as if I’m in a scene from All the President’s Men. Although I haven’t placed a red flag on a balcony, I have been granted entry to a world — one where music, films, games and books are free.

When Danny pulls up he seems like your average 20-year-old. Disheveled, self-aware and a tad bit paranoid. He’s excited to be interviewed but makes sure to remind me not to say anything to his parents in the event they come home.

Danny’s house sits at the end of a suburban cul-de-sac. His room is poorly lit. There is clutter. Piles of dirty laundry cover his floor, much of which appear to be t-shirts with logos. As he fires up his PC, there is an awkward silence as the system boots. His walls are adorned with posters of bands, scantily clothed women and beer. It strikes me that the analog things in Danny’s room were most likely purchased.

As I turn back he’s smiling and pointing to his computer screen. At first it appears to just be a product listing for Pirates of the Caribbean on Amazon. But as my eyes meet Danny’s tapping finger I see the words “download 4 free.” It looks like a mistake but Danny tells me with a sense of pride that I’m experiencing “Pirates of the Amazon,” which is an add-on for Firefox. Add-ons are simple scripts that enable the Firefox Web browser to extend its functionality. “Pirates of the Amazon” along with “IMDB Pirated,” which turns IMDB into a full-fledged torrent search engine of sorts, are two of the newer add-ons that are simplifying the discovery of torrents. – read more daytrotter.com is a cool music discovery site. Lots of free mp3 downloads of indie bands and they do awesome studio sessions with artists.

opentape.fm is an open-source package that enables you to easily make and host your own mixtapes online. Easy to install – all you need do is create a directory and upload the the files. Nice ajax type backend enables you to drag and drop the order of your playlist. Even includes a embeddable player 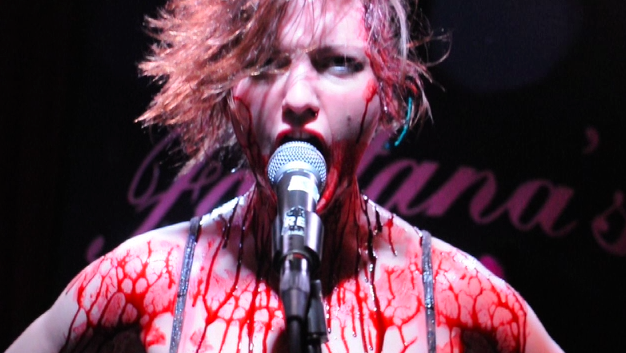 Have you seen the Bambi Killers? A cross between Grindhouse, Switchblade Sisters, and a Kenneth Anger film – the Bambi Killers put on an electric performance. We recentaly shot an episode of RADAR with them.

Left as Rain is a cool music discovery blog. Alex and Chris do an awesome job of curating the site.

Institute for the future of the book – interesting project that examines the evolution of story, writing and the role that the written word has in the digital age.