The Pirate Bay Away From Keyboard is a new doc that captures the controversy around the Pirate Bay and its founders. The doc will be released day and date at a major festival later this year. The filmmakers plan to make the film available as a free download at the same time it has its festival premiere. The trailer was released only three days ago and now has over a million views.

From the doc’s official site

Director’s Statement: I met Josh Sandoval at a party in an abandoned airfield off the I-10 in Chino, California. He had a lime-green Mohawk and was wearing a matching Screamers T-shirt, in honor of the L.A. punk band that never recorded an album. He looked malnourished and lost, and claimed he was on 5 tabs of acid. It was impossible to talk to him. His head was lost in the clouds. Then I saw him skate. I think Josh is like a lot of kids from his generation–smart enough to know a potentially bleak future looms and scrambling to figure out a way to survive in it. He’s also on a wavelength all his own.

In THE SHOCK DOCTRINE, Naomi Klein explodes the myth that the global free market triumphed democratically. Exposing the thinking, the money trail and the puppet strings behind the world-changing crises and wars of the last four decades, The Shock Doctrine is the gripping story of how America’s “free market” policies have come to dominate the world– through the exploitation of disaster-shocked people and countries. Read More

I’m a fan of people caught in real moments and especially ones that leave room for interpretation. Martin Parr worked for over a decade to photograph bored couples all of which he had no relationship to. The photos where released in a book in 1993 called Bored Couples.

click the image to view a gallery of the photos 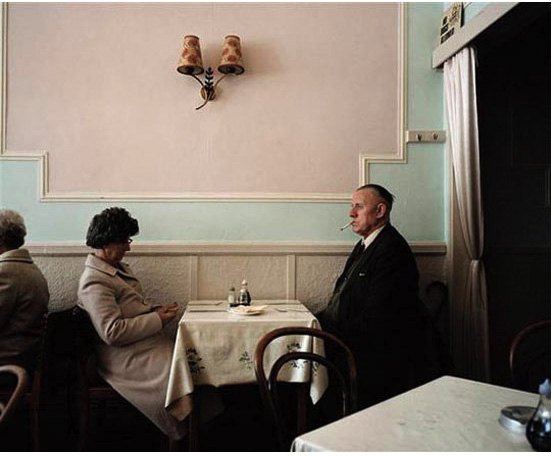 In the current issue of Filmmaker Magazine I go behind the scenes of Collapsus an interesting storytelling project from Holland. The year is 2012 and the world is on the brink of collapse.Rolling blackouts, depleted resources, civil unrest, assassinations and political dissension have thrown the world into a state of chaos. We follow the adventures of a group of young people as they lead us into a world of conspiracy, treason and failing energy supplies. While it sounds like it could be the description of a Hollywood blockbuster, it isn’t. Collapsus: The Energy Risk Conspiracy is in fact a transmedia companion to a television documentary by Dutch broadcaster VPRO entitled Energy Risk. Collapsus takes theories and predictions from the Energy Risk documentary and transports them into a fictional story set within the not-so-distant future. Collapsus becomes a hybrid narrative that combines live action, animation, gaming mechanics and social entertainment in order to present a different perspective on the issues surrounding our struggle to transition from fossil fuels to alternative forms of energy. Tommy Pallotta, no stranger to innovative forms of storytelling (he helped to revolutionize independent animation techniques with his work on Waking Life and A Scanner Darkly), was tapped to direct Collapsus by award-winning Dutch transmedia shop Submarine.

In the spring of 1971 the Rolling Stones departed the UK to take up residence in France as tax exiles. Keith Richards settled at a villa called Nellcôte in Villefranche-sur-Mer and this became the venue for the recording of much of the bands masterpiece Exile On Main Street. Stones In Exile tells the story in the bands own words and through extensive archive footage of their time away from England and the creation of this extraordinary double album, which many regard as the Rolling Stones finest achievement.