As another year passes many are thinking ahead to 2013 and their future. But what about a future beyond 2013? What would your “one wish” be for a 100 years from now?

A few weeks ago, we officially kicked off an ambitious project with a 100 year timeline called “Wish for the Future.” To date we’ve received over 4,000 wishes from around the world. You can see them here. And you can make your’s here.

We’re currently collaborating with GOOD around a special section of their site entitled the “Future.” A mix of people from all walks of life have been sharing their wishes for the future in some wonderful posts.

My wish is let’s stop stealing the future

“This is critical as we are up against a powerful machine of mistruths with hundreds of millions of dollars of media and propaganda behind it. We are but a David to a massive Goliath. Yet, I fundamentally believe that we are on the precipice of a movement, powered by truth, reality, and a newfound ability to create collective action on a global scale leveraging a rapidly evolving social exchange landscape.” Read More

My wish for the future is that everyone is allowed to discover their own sense of agency so that they feel like they can make a positive difference in the world. I’d like everyone to be able to have that feeling of, “I made that.”

“This idea of “looking under the hood” has become something I think about a great deal now when I’m thinking about who gets to tell stories. I think agency is hugely important. It means that we feel less powerless in the face of algorithms that tell us what to buy and who to like. And it means that we think about who has agency, who tells stories and who listens. I like the idea of making the web, not just using it. I like the idea of giving kids Arduinos and Raspberry Pis and soldering irons and letting them see how to construct things that beep and move and do things.” Read More

I wrote one centered on my wish for the future…

How can we design with, instead of for, in order to build better social services?

“This past summer, I discovered the NGO Orange Duffle Bag. When a foster child turns 18, they are pushed out of care and encouraged to start their lives outside the system. Orange Duffle Bag provides mentoring and life-building skills in an effort to help foster children navigate a new chapter in their lives. Without a self-directed plan, many teens who age out of foster care are at high risk of becoming homeless, forced into prostitution, drug or alcohol addicted, or in jail by the time they’re 25. Only 3 percent go on to higher education and only 3 percent of that number graduate from college. Because so many people have access to their files, many become victims of identity theft. Upon trying to get a job or take out a college loan, they are greeted with the fact that someone has run up debts in their name.” Read More

Our goal for 2013 is to gather a million wishes. In 2014, at the World Economic Forum in Davos, students will present the wishes to world leaders.

About Wish for the Future

Wish For The Future is a creative platform to empower everyone to shape the world around them and create a better future now. Participants make a WISH for the future. Then user GRANT a wish through a creative act or action such as writing a story, making a piece of art, creating a video, or visiting your local soup kitchen. Curated granted wishes are prototyped using 3D printers and software hacks in an effort to create a tangible artifact. Afterward, wishes, creative expressions and prototypes will be placed in multiple time capsules and buried for 100 years.

Inspired by the Voyager Golden Records that were sent into space in 1977 and the work of Buckminster Fuller, Wish for the Future is an effort to ignite the imagination of many through experiential learning, creative expression and collaboration.

Brought to you by aerospace firm Aerofex, the bike runs on a pair of powerful fans. It picks up on instinctive movements people make while riding a bicycle or motorbike, then moves in the same way (except, you know, flying), meaning anyone can have a go at it. For safety reasons, they’ve tested it at 30 mph and 15 feet high, although earlier versions of it went as fast as a helicopter. Read More

Meet “Yuki-taro, the friendly snowbot” – for a million yen you can have a Snow Removal Robot that clears snow while creating igloo bricks, is GPS enabled and uses twin cameras to see. 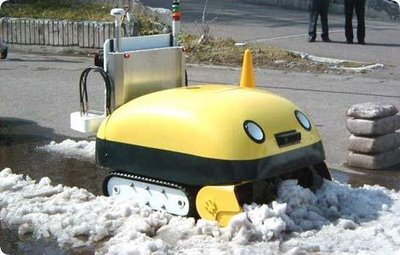